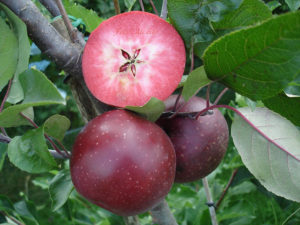 October is National Apple Month in the United States. This generic promotion celebrates something as American as apples. Well, no, apples came with colonial settlers to the U.S. and Canada, but we still celebrate apples and use the exclamation “as American as apple pie”.

Official statistics for apples: 7,500 producer/farmers, grow 240 million bushels in an average year, on 322,000 acres of orchard. The value at retail is around $20 billion. The United States is second behind China in apple production worldwide.

Many homeowners have a few apple trees and are not counted in the farm census. It is with these folks in mind I will continue today’s column.

Apple trees do not usually reproduce true from seed; so, you get a new kind from seed, and most of the time they will be inferior to the apple from which the seed was planted.  Many of our old-fashioned or ‘antique’ apple varieties resulted from luck or good fortune when a seed grew into a tree and all the community raved about it. John Chapman (“Johnny Appleseed”) is a famous apple distributor. His work was both seed planting as well as grafting and selling trees. If you have plenty of space, and pies, cider or juice or jelly or apple butter is what you want then the seedling apples may work just fine for you. But for fresh eating, most of what comes up from seeds won’t come close to the apples from the store.

Most homeowners, as well as small orchardists, will purchase grafted trees. They will have a tree of the apple they desire, growing up from a rootstock to give the size of tree they want or have room for. Fruit tree nurseries may offer three or five or more root options for the trees they sell. Most ‘big box’ stores have very limited choices, and may not be labeled correctly at that.

Personally, I grafted more than two dozen different apple varieties last spring, many of them being red both on the outside as well as inside. And the root onto which these grafts were made will produce many different sized trees. Some will be full sized trees. Some simi-dwarf, and some dwarf or very dwarf. The Bud-9 and some of the new Geneva roots produce a tree which can be grown in a container on the patio if so desired. Some small trees don’t have good root systems and require a stake or a fence or trellis or something to hold them up straight.

Apple month is a super time to visit a farm stand, and maybe try at least one cultivar (cultivated variety) you’ve never tasted from the supermarket. Farmers Markets can be a great place to find odd varieties and also visit with local farm neighbors. It is also an ideal time to start planning and ordering your new apple trees for either fall or next spring planting. There are several small growers around the nation, and lots of old fashioned or antique apples can still be obtained by those who seek them out and shop early. There are also large nurseries and the chain stores who will have trees for sale in the spring; selling Red or Yellow Delicious, Granny Smith, Gala, Fuji, and perhaps a few other popular varieties.

How to plant or grow apples will have to be a topic for another day. I’ll sum this up by saying you could be growing a hundred or more different apples that you’ll never see at the grocery, and even as many as a thousand or two if you really search. Sweet, sour, bitter, hard, soft, early, late, big, little, shiny or ugly warty and russeted. Yes, even with red flesh, as I’ve been experimenting with. You might be surprised what you could grow at your place. National Apple Month is a reminder to appreciate some local grown options, rather than those stored in warehouses and sold year around at the grocery store, and possibly to grow a few for yourselves.