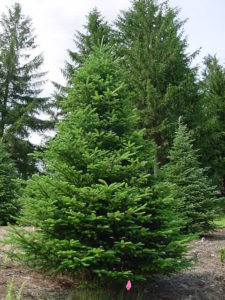 Almost anywhere in America one can look out a window or along the highways and see pine trees. Spruce, fir, hemlock, and cedars may also be in the picture. Junipers, arborvitae, taxus, and certain other trees are nice large evergreens, but are not cone bearing. And, technically, ginkgo is considered a conifer, though you wonder if the botanist who decided that was having a bad day. Stately evergreen conifers add much beauty and usefulness to our yards, our forests and the whole earth, and this is never more evident than during the winter when deciduous trees are barren.

Pines give us lumber, pulpwood for paper (for the office, the classroom, and when you gotta’ go), turpentine and other distillates for varnishes, antiseptic and cleaning uses. The pine cones and boughs are used for decorations. And the seeds are preferred by many birds and wild animals. Pine “nuts” are a delicacy; seeds of certain varieties of pine trees, such as pinyon pine, Swiss stone pine and Korean stone pine, are enjoyed by humans, too. The shade in summer, the protection from wind in winter (especially useful to birds that do not migrate southward when it gets cold), and the musical sounds of the breeze coming through the pine trees are all benefits we enjoy from pines.

The world’s oldest known trees are Bristlecone pines. Ancient trees can tell us a lot about our world from the past, like the climate, years of calamities, and the like. A lot of people are yapping endlessly about global warming (I really think it’s more about global control and ways to collect more taxes), but Eric the Red and his son Leif settled on Greenland before 1000 A.D. and started a colony as farmers for a few years. Leif Erickson (Eric’s son) discovered Vinland or Newfoundland. If it wasn’t warmer then in that part of the North Atlantic Ocean than it is today, farming on Greenland would not have been possible. Trees found in swamps or the bottoms of cold lakes in the north—lost by accidents probably by loggers of the time—have preserved many old growth trees which we can still do research on today.

The white pine is over-used by homeowners who want a fast growing evergreen. After 40 years when it is eighty feet tall and a threat to fall on the house, it doesn’t seem to have been such a great idea. But, I’ve seen a grove of white pines, with all the lower limbs cut off, allow wind to blow under them and really cool off a seating area in summertime. They have their place in a modern landscape. Just use discretion.

Austrian pine, Japanese black pine, Ponderosa pine, limber pine and Scots pine are other pines one may encounter in people’s yards. As mentioned earlier, the stone pines are dwarfish, and even provide tasty seeds if you beat the birds and squirrels to them. And many a yard has a dwarf mugho pine.

Hemlock (tsuga canadensis), is a very lovely tree that works well in many yards. It’s not so fast to become too large, and it can even grow successfully in shade of other large trees. With hemlock, too much heat (don’t plant it on the south side of a house with a brick wall for instance) can keep hemlock from doing well, as can soil that has too much alkalinity, such as limestone soils of the bluegrass. There is also the wooly adelgid insect to be concerned about.

Spruce trees (picea), especially Norway spruce, white spruce and blue spruce are very useful landscape plants. They are more tolerant of sweet limestone soils than most pine or hemlock. They also hold up well in windstorms, their pyramidal frames seeming to deflect winds. They make a super place for birds to hide in winter storms.

Fir trees (abies) are better for areas where summers are cool and damp, or at least nights aren’t so muggy. Most firs can take really cold temperatures, but there are also some that can’t and which thrive only in very specific climes. Among those for Kentucky, and parts of Tennessee and North Carolina, are white fir or concolor fir, Canaan fir, and the Turkish fir. Some of the most beautiful cones are born on fir trees.

Cedars (cedrus) are either Atlantic cedar, Cedar of Lebanon, or Deodar cedar. These are the true cedars, and make giant stately trees….although they can look rather skinny in their youth. Junipers, which produce seeds and not cones, are often called cedars, including the “red cedar” of the eastern states. Cedar lumber is usually from juniper trees in the United States. Atlantic cedars are blue, and are the hardiest. Cedar of Lebanon will survive 20 below, and Deodar cedars will do well to 5 or 10 below zero Fahrenheit.

The monkey puzzle tree is a conifer. And also has tasty nuts. This tree is for places that stay above zero in winter. It’s a very spiney tree, with large cones and edible seeds. As I mentioned, ginkgo is considered a conifer. And there are other cone bearing trees, but these are primarily what one will find for consideration in the landscape.

Those who want natives, the Virginia pine, the hemlock and red pines may be collected from the wild and moved to your yard. But, hemlocks are for sale at nurseries for reasonable prices, and the local pines are not the best to place in the front yard.

For the collector, the experimenter, or the person who has to have something different, there are garden centers who cater to a high-end clientele that will carry a number of exotic evergreen trees. (Slow growing trees always have a higher price because of so many years somebody has invested in growing it to a good size for sale. Rare ones will also command a premium price.)

Landscaping that showcases large evergreen trees, especially the conifers, seems not to need a recommendation as it speaks well of itself. Everyone loves a stately evergreen tree in the right place. Consider one or several of these lovely trees next time you are planning some landscaping; the kids, the birds and squirrels and other wildlife will all be happy you did.